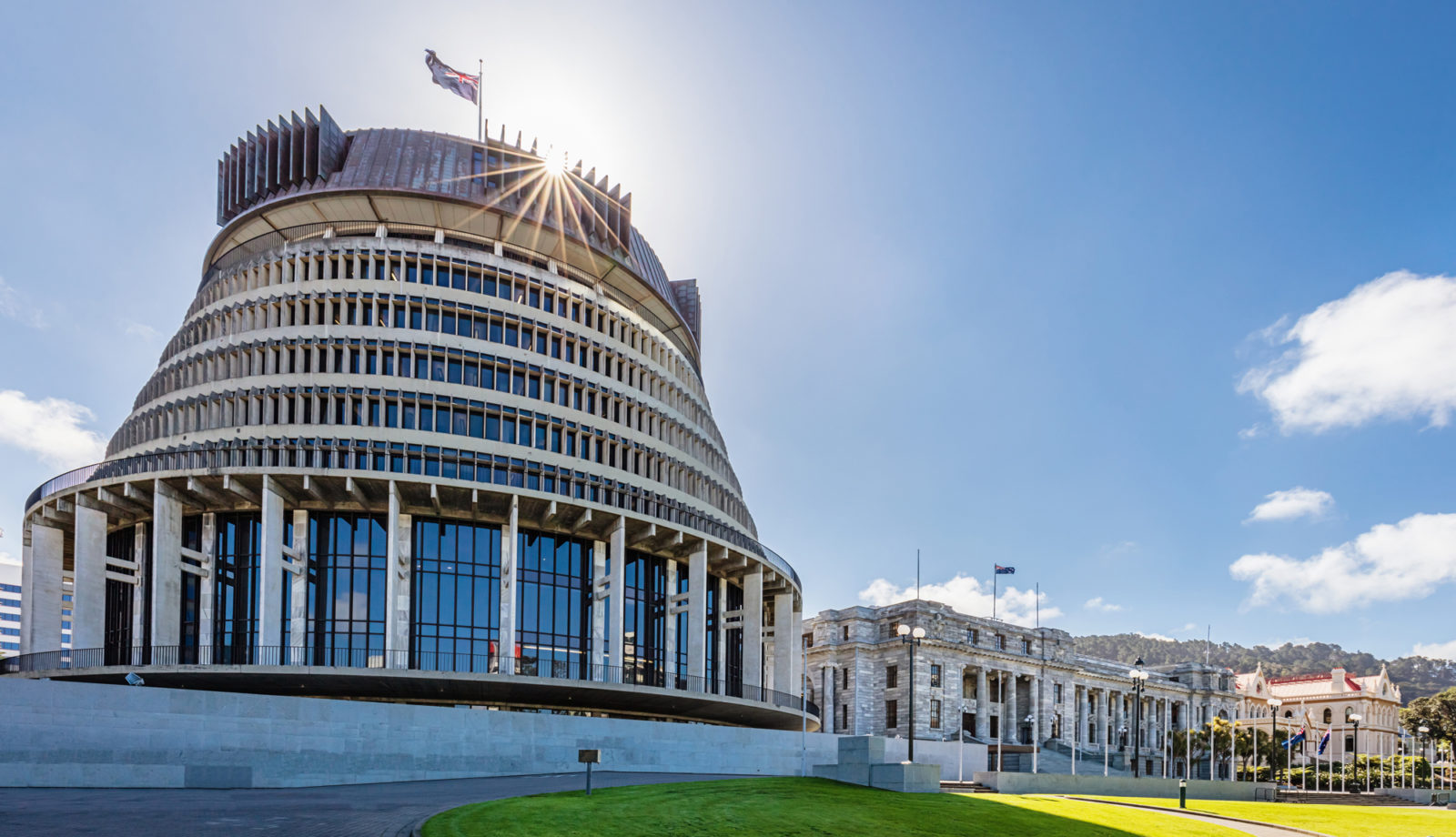 Aotearoa/New Zealand’s1 Climate Change Response (Zero Carbon) Amendment Act was passed in 2019 with near- unanimous support. The Act enshrines long-term emissions reduction targets, five-year emissions budgets, as well as a number of governance structures and processes to support their attainment. The Act was largely inspired by the UK’s Climate Change Act and consequently mirrors a number of its core features.

However, Aotearoa/New Zealand departs from the UK in important ways, including by enshrining separate emissions reduction targets for biogenic methane and all other greenhouse gases (GHG), as well as through its emphasis on engagement, recognition, and inclusion of iwi2 and Māori throughout the development and implementation of the Act. This case study reviews the defining features of Aotearoa/New Zealand’s legislation.

The long-term targets can only be changed if there have been significant developments in global action, science, Aotearoa/New Zealand’s economic or fiscal circumstances, obligations under international agreements, technological developments, distributional impacts, equity implications (including generational equity), risks associated with emissions reductions, or social, cultural, environmental, and ecological circumstances.

The Climate Change Commission (the “Commission”) was established through legislation to provide independent, expert advice to Government on setting emissions budgets as well as on the direction of the policies required to meet them and to adapt to the effects of climate change. The Commission is also responsible for monitoring and reviewing Government’s progress towards its climate change goals. The Commission consists of a Chairperson, a Deputy Chairperson, and five members, who are appointed by the Minister for their expertise. The commissioners are experts in the fields of climate science, adaptation, economics, agriculture, economics, and the Crown-Māori relationship (Climate Change Commission, 2019).

The Act dictates that, starting December 31, 2021, Aotearoa/New Zealand must set five-year emissions budgets at the national level, with three consecutive budgets in place at any time.3

An emissions budget can only be revised as a result of methodological improvements in the way emissions are measured and reported or significant changes to the conditions upon which the budget was set (including, but not limited to, scientific advice, technological developments, the results of public consultation, the impacts of actions across regions and communities, the technical or economic feasibility of budgets, and the implications, or potential implications of land-use change for communities). In addition, the revision must be recommended by the Climate Change Commission.

The Government is required to prepare and make publicly available a plan for how it will meet an emissions budget. The plan may also include policies for meeting future emissions budgets. The Act does not prescribe how the Government must meet its budgets or which policies must be used. However, it does establish a set of considerations that must be taken into account by government when setting targets and establishing plans.

The plan must include at minimum sector-specific policies, multi-sector strategies, adaptation policies, and strategies for minimizing impacts on workers, employers, regions, and communities. Aotearoa/New Zealand’s legislation also dictates that emissions must be met, as far as possible, through domestic emissions reductions as opposed to through international carbon credits.

The Act also dictates that a national climate change risk assessment be prepared every six years to identify and address the risks from a changing Aotearoa/New Zealand climate. The Minister for Climate Change is required to prepare the first National Climate Risk Assessment, with all subsequent assessments prepared by the Commission. In response to each national climate change risk assessment, the Minister must prepare a national adaptation plan that demonstrates how government plans to address those risks.

The Commission is required to regularly monitor and report on progress towards meeting emissions budgets and the longer-term target. The Commission must prepare annual progress reports that outline emissions reductions and assess the adequacy of current plans. The Minister must publish a response no later than three months after receiving the Commission’s report.

The Commission must also prepare a report to government, due two years after the end of a budget period, which evaluates the progress made in that period and recommends whether banking or borrowing would be appropriate. The Government must make publicly available a response that provides a rationale for any shortfalls as well as any departures from the Commission’s advice.

The scope of the Act goes beyond emissions reductions to consider climate change risk and adaptation, as well as broader social, economic, and cultural impacts of climate policy. As outlined above, the legislation requires that the Minister prepare and make publicly available a national climate change risk assessment, which must be followed by a national adaptation plan. The national adaptation plan must set out the Government’s objectives, the strategies, policies, and proposals to meet those objectives, the time frames for implementation, as well as the measures and indicators that will enable regular monitoring and reporting.

Beyond adaptation, the Act also ingrains broader social and economic considerations into the process for setting budgets, developing action plans to meet them, and for managing climate change risks. For example, when performing its functions and duties, the Climate Change Commission must take into account a number of considerations, notably:

In addition, the government’s action plan to reduce emissions must include strategies for minimizing impacts on workers, employers, regions, and communities.

The majority of timelines outlined in the Aotearoa/New Zealand Act are aligned with those in the UK Climate Change Act 2008, including setting emissions budgets three at a time and at least a decade in advance. However, unlike the UK Act, Aotearoa/New Zealand’s Act enshrines a set timeframe within which the government must release its action plan to meet the emissions budgets. A legislated deadline ensures governments are accountable for developing policies in a timely manner and avoids undue delay. In the UK case, the absence of such a deadline allowed the government to take fifteen months to publish its action plan for the fifth emissions budget (Fankhauser et al, 2018).

In Aotearoa/New Zealand, agriculture is a major driver of the economy, but it is also a significant contributor to the country’s emissions inventory—notably producing considerable amounts of methane. The Act’s two-target approach can be seen as trying to balance the demands of different stakeholder groups and economic sectors with the country’s unique opportunities and costs associated with climate change mitigation, as well as with what climate science can tell us (Reisinger and Leahy, 2019). Nevertheless, it has drawn criticism from both sides of the debate, being condemned as too weak by some (largely environmental groups) and too strong by others (largely the agricultural sector and the Official Opposition). While the wide range set for biogenic methane emissions reductions (between 24 per cent and 47 per cent below 2017 levels by 2050) may have increased buy-in across diverse stakeholders, it does not provide as much certainty and predictability for the agriculture sector as would a more definitive target. In addition, the Act does not make clear how biogenic methane factors into the five-year emissions budgets.

Despite debate over the level at which Aotearoa/New Zealand’s methane targets were set, the approach of treating short-lived pollutants (like methane) and long-lived pollutants (like carbon dioxide and nitrous oxide) differently merits consideration. Whereas emissions from long-lived pollutants stay in the atmosphere for hundreds to thousands of years, methane has a much shorter lifetime in the atmosphere, on average 12 years (USEPA, 2020). But it is an extremely potent pollutant, trapping over 70 times more heat than the equivalent amount of carbon dioxide over a 20-year period (ECCC, 2019). As short- and long-lived pollutants have different life cycles and impacts, there may be value in treating them differently, including through separate emissions reduction targets and budgets.

In Canada, methane is the second most common GHG, accounting for 15 per cent of Canada’s total GHG emissions. The oil and gas sector is the largest industrial polluter of methane emissions in Canada, with landfills, wastewater, animal waste management, and coal mining being other key contributors (ECCC, 2019). While in Aotearoa/New Zealand, nearly all methane is biogenic—presenting different emissions reduction opportunities and costs than methane emissions from, say, the oil and gas sector—governments here may nevertheless wish to learn from Aotearoa/New Zealand’s experience to determine whether setting separate emissions reduction targets and budgets is a useful approach in the Canadian context.

In Aotearoa/New Zealand, the Government worked closely with iwi and Māori representative organizations throughout the development of the Zero Carbon Bill. The legislation features frequent consultation and engagement with Māori and iwi representatives, consideration of traditional knowledge, as well as recognition of the Treaty of Waitangi—an agreement signed in 1840 between the Crown and Māori chiefs that establishes and guides the Crown-Māori relationship (The University of Melbourne, 2020). For example, the legislation requires that:

Although the legislation requires that members of the Commission have understanding and expertise relating to Māori rights and traditional knowledge, the legislation does not explicitly require Māori representation. However, Māori leaders pressed the Government to have a voice at the table and ultimately, an Indigenous representative was appointed as Deputy Chair of the Commission. The Aotearoa/ New Zealand Māori Council came out in support of the Zero Carbon Act in advance of its passing in Parliament (Scoop News, 2019).

While Aotearoa/New Zealand’s experience can offer helpful lessons for Canada, it should not be replicated without due consideration here, since its approach is suited to its own context. There are profound differences between the experience of Indigenous peoples across and within both countries—including historical context, constitutional and treaty rights, culture, language, and diversity—that must be acknowledged. Governments in Canada should strive for the highest standard of representation and inclusion of Indigenous peoples.

Fankhauser, Sam, Alina Averchenkova and Jared Finnegan. 2018. 10 Years of the UK Climate Change Act. The Grantham Research Institute on Climate Change and the Environment and The Centre for Climate Change Economics and Policy.
http://www.lse.ac.uk/GranthamInstitute/wp-content/ uploads/2018/03/10-Years-of-the-UK-Climate-Change-Act_Fankhauser-et-al.pdf

This case study was prepared by Anna Kanduth of the Canadian Institute for Climate Choices, with staff contributions from Jason Dion and Caroline Lee.